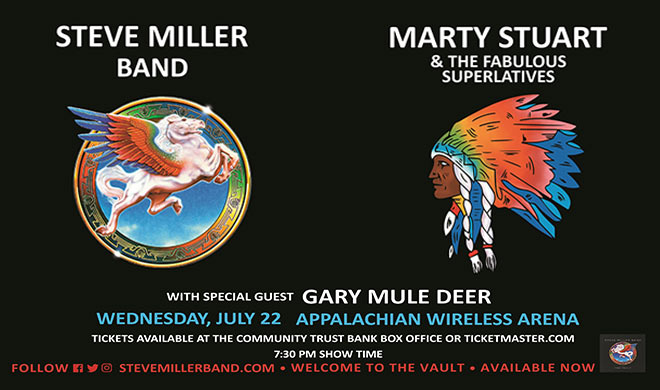 Steve Miller Band along with Marty Stuart and His Fabulous Superlatives are coming to the Appalachian Wireless Arena Wednesday, July 22, 2020! Featuring special guest Gary Mule Deer, the show will begin at 7:30 p.m.

Steve Miller Band is known for their string of American rock classics, such as “The Joker”, “Fly Like an Eagle”,  “Take the Money and Run”, “Jet Airliner” and many more. Marty Stuart is also well known as one of rockabilly country’s legends, with hits such as “Hillbilly Rock”, “The Whisky Ain’t Workin'”, “The One’s Gonna Hurt You”, and “Same Old Train” just to name a few.

Tickets may be purchased at the Community Trust Bank box office, and online at Ticketmaster.com.