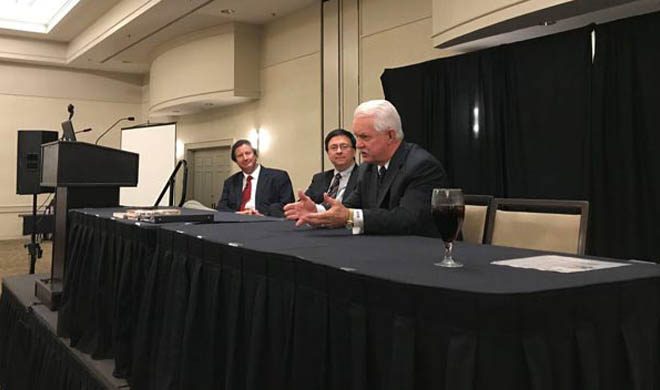 Kingsport, TN – The Tennessee Bar Association’s 2017 Annual Convention featured a very special group of keynote speakers, the Hatfields and the McCoys. William Keith Hatfield, great grandson of “Devil Anse” Hatfield, and Ron McCoy, third-great grandson of Randolph McCoy, were scheduled to speak at the convention, detailing their experiences with their families’ storied history. Their presentations focused on the escalation of the feud, the role law played in the feud, as well as the feud’s resolution, and where the two families are today.

“The Tennessee Bar Association members had a keen interest in the Feud,” said Hatfield. “I could not walk the grounds of the site without dozens coming up, asking questions, and telling me they loved how we brought it all to life for them. They now see these were real people, struggling as we all do, with relationships, differences, and challenges. In our times of rancor and division, they were most inspired by our conflict resolution and where we are today. This was the inaugural event of what my good friend Ron McCoy and I plan for the future. The Feud is a vehicle to help others find faith, forgiveness, reconciliation and peace. I was honored to be part of this.”

“It is always a privilege to have the opportunity to share our family history,” said McCoy. “In this day and age, it’s more important than ever for the families to step up and lead by example. If the Hatfields and McCoys can come together in peace and fellowship, then there is still hope for the world.”

Pike County Tourism CVB board member Bob Scott, who not only owns the Randolph McCoy property, but is also a Hatfield descendant, was also featured as a presenter. Scott spoke on the importance of the feud history, as well as plans for rebuilding the McCoy cabin that was destroyed during the infamous New Years Eve massacre. Scott also auctioned off a ham, as well as a trip to Pike County Tourism CVB’s upcoming 4th of July on the Hilton Garden Inn Terrace fundraiser, which garnered $450. The funds generated from the auction and this event will be used to showcase talent from Eastern Kentucky and the surrounding region at the 2018 Kentucky State Fair.

“I thought that after one hundred and thirty nine years the pig had been totally ignored,” joked Scott. “Having that many attorneys in one room provided the perfect opportunity to secure a structured settlement, arranged in the pig’s honor.”

“I feel like these presentations are a great fit for this convention, as the Hatfields and McCoys battled in the courtroom perhaps more than on the streets and hollows of Eastern Kentucky and West Virginia,” said Tony K. Tackett, Pike County Tourism Executive Director. “We believe that something positive can come from the Hatfield & McCoy history, it’s a story we should never forget.” Tackett moderated the question/answer portion of the presentation, and also commented on the Hatfield-McCoy feud tour’s success.

The Tennessee Bar Association’s 2017 convention featured well over 200 in attendance, and was held June 14th through 17th at the Meadowview Marriott in Kingsport, TN.

William Keith Hatfield is the pastor of Charity Baptist Church in Tulsa, Oklahoma, where he has served for thirty-six years. After he moved Charity from its traditional building into a nine-apartment project, it now ministers to many broken and poor people. Hatfield and his wife, Sharon, have six children and fifteen grandchildren. He is the great grandson of Anderson “Devil Anse” Hatfield, from the famous Hatfield-McCoy feud history, and is dedicated to educating the public on the feud, as well as conflict resolution. He is also the author of six books including his most recent release, “The Shark Tank Theology: How the Tank Mirrors Life’s Journey”.

Ron McCoy is the great-great-great-grandson of Randolph McCoy, patriarch of the McCoy clan during the Hatfield-McCoy feud. McCoy helped organize the first national reunion of the Hatfields and McCoys in 2000. In 2003, he helped shepherd the historic Hatfield-McCoy truce signing, an event carried live on national television. He is the author of the book “REUNION: Hatfields and Mccoys”, a book detailing his journey in discovering his family history. He and his wife Bobbi Harris McCoy are deeply passionate about promoting a message of peace and reconciliation using the Hatfield-McCoy family history as an impactful example.

Bob Scott, along with his wife Rita are the owners of the Randolph McCoy property in Hardy, KY. Scott is also a board member of the Pike County Tourism CVB commission, and is heavily involved in promoting the Hatfield McCoy Feud Historic Tours of Eastern Kentucky and West Virginia. Scott was instrumental in securing National Geographic’s “Diggers” program to do multiple episodes on his historic property, which lead to the discovery of many authentic Hatfield-McCoy feud artifacts, including bullets, day-to-day items and burnt wood from the McCoy cabin. Scott continues to work along with Pike County Tourism CVB as a leader in the promotion of the feud, as welcomes all visitors to his property where the McCoy well still stands. 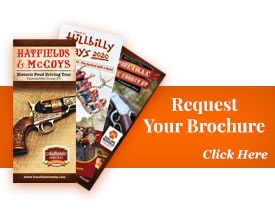