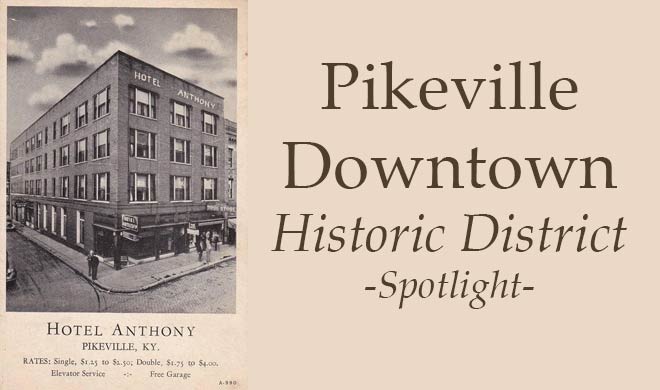 Our hotels are the lifeblood of our local tourism industry. They not only provide lodging for our business travelers, but also our tourists, who spend several days in our community exploring our many interesting attractions, such as the Hatfield McCoy Feud sites, our live entertainment venues, mom-and-pop shops and our beautiful outdoor locales. So we thought it would be interesting to explore one of Pikeville’s hotels from the past, Hotel Anthony.

Hotel Anthony was built between 1920 and 1925 and is located on the corner of Grace and Main Street in downtown Pikeville, Kentucky. It is featured on the National Register of Historic Places. Anthony Williams was the original owner of the hotel, which was, at the time, the only four-story brick building within the commercial historic district, and was also the tallest building in Pikeville until the First National Bank was built. Hotel Anthony was constructed with a simplistic design, and is made of enduring brick with decorative stone.

The building houses businesses until this day and is a central feature of Main Street. For better or worse, various remodeling efforts have been made to the building over the years, yet it still stands as one of Pikeville’s notable historic structures.

Pictured here is an interesting old ad for Hotel Anthony. The ad details rates as being a single for $1.25 to $2.50, with a doubles being $1.75 to $4.00. That’s a far cry from today’s prices, yet with inflation and other factors being considered, this is still quite a deal. A quick google search reveals that the average income of the early 1920’s was just over $3000 a year, with income tax dropping from a massive 77% in the mid-to-late teens, to around 25% by the time 1925 rolled around. If my math is correct, one could have purchase a double bed for a couple of hours wage. That’s not bad at all! But times have changed, and hotels feature a lot more amenities, staff, and all of the comforts we’ve come to expect, with a price to match.

The ad also highlights that Hotel Anthony offered elevator service (which is now a given for hotels), and free garage. If you look closely, the ad depicts the old drug store as being another convenience for those staying in the hotel. The great thing about exploring history is that we not only learn from the past, but we can see how things have progressed.

Click here to check out today’s amazing hotels in Pikeville, Kentucky, and plan your trip to historic downtown Pikeville!